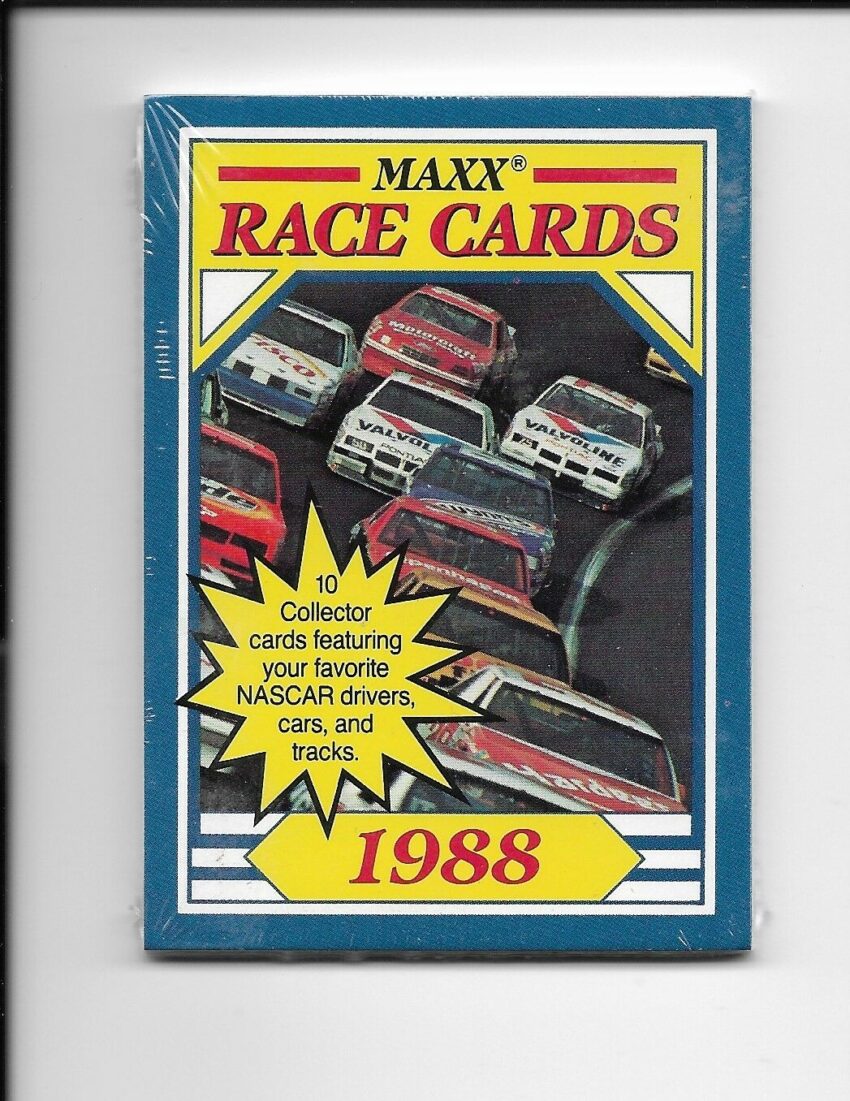 Here’s a throwback from one of my earlier videos where I’m busting five 1988 Maxx packs from the Charlotte printing a.k.a – First Annual Edition. The 1988 Maxx set was the first to be distributed via wax pack and factory set form. They could be found in the southern states at your local drug store. They were also available at the merchandise haulers at the race tracks.

The 1988 Maxx racing set is the release that put NASCAR cards on the map.  This was the first time NASCAR cards were available in ‘packs’ and sold somewhere other than the race tracks.  There were 44 packs per 1988 Maxx box and you could also order the 100-card factory set from Maxx as well.  Every Header card had an offer on the back to purchase a complete factory set directly from Maxx.

The 1988 Maxx set contains cards from 3 printings.  The Charlotte name refers to what was believed to be the location of the second and third printings, although all three printings took place at the same location (Sheriar Press – located in Myrtle Beach, SC).  The Charlotte set is often called the “First Annual Edition” by collectors. It contains numerous variations from the Myrtle Beach set (First Edition).

The cover cards were printed with two different starburst descriptions (pack versus factory set) in both the Charlotte and Myrtle Beach versions. During the second printing, 10 cards including the two variations of the cover card were changed.

The Myrtle Beach notation was removed from the four checklist cards.

The Talladega Streaks #10 card was eliminated to make room for Darrell Waltrip.

Checklist #19 was changed to reflect this move.

On card #26 Phil Parsons, his wife’s name was included in the family section on the back of the card. It was excluded in the first Myrtle Beach printing.

During the third printing of the set, six cards were changed. The #59 1988 Begins card was eliminated to make room for the #59 Brett Bodine card. Checklist #69 was changed to reflect this move. The #43 Daytona International Speedway card was changed to card #47. The #47 Single File card was eliminated. Richard Petty was included in the set on card #43. Checklist #36 was updated to reflect the changes on cards #43 and #47. On the #88 Ken Bouchard card, the family section was changed to reflect the fact that he and his fiancée, Heidi, were married during the season. There is also a card #99 of Dale Earnhardt that was originally wasn’t released due to Maxx not getting approval from Dale. The card was later issued with a sticker on it via an insert redemption in the 1994 Maxx Medallion .